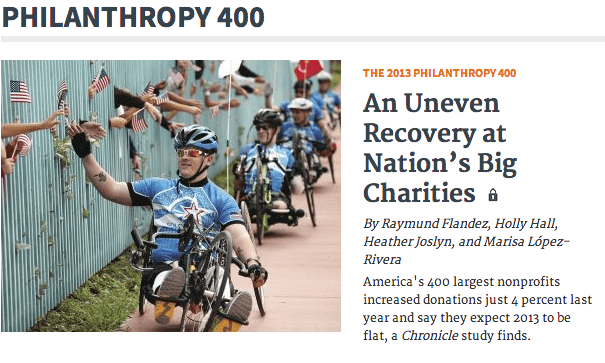 Boy, the fundraising reports just keep coming!  Yesterday my Chronicle of Philanthropy arrived with this year’s Philanthropy 400, a listing of the organizations raising the most money nationwide.  In light of the Urban Institute/AFP report we looked at the other day, it’s somewhat sobering news — if the top 400 are navigating rough waters in 2013, then you can bet it’s really tough going for the smaller organizations!

The other striking thing from the COF report is a continuing trend that 5 of the top 20 fastest growing entries on the Philanthropy 400 were essentially vehicles for donor-advised funds such as community foundations, federations, or companies like Fidelity Charitable.  In fact, Fidelity is on the verge of overtaking United Way for the #1 spot.  Within that segment, there’s even some niche-seeking going on — they profiled one interesting organization spotlighted that specializes in soliciting — and often holding rather than liquidating — complex assets (e.g. operating businesses) donated by evangelical Christians.

Locally, that trend points to opportunity (but also competition) for The Community Foundation.  On the other hand, it also scares me that the philanthropic marketplace is mirroring the economy in general, with centralization of dollars and more direct control by a smaller group of wealthy people who probably give most to sub-sectors like higher education, health, and elite arts organizations.  Meanwhile, human services organizations (and their donors) will continue to struggle.

Here are some ways the Chronicle described that human services nonprofits are coping in this difficult fundraising environment: